Unbecoming of a Buddhist Part II

GNH, or Gross National Happiness, is a phrase on the tips of the tongues of most Bhutanese and nearly every foreigner who visits Bhutan. Far from being a fact of Bhutanese life, however, it is, rather, a set of policy goals and values created by Bhutan’s beloved fourth king to guide his country through what he must have forseen would be difficult of times. GNH values include cultural preservation and environmental sustainability, among other things. 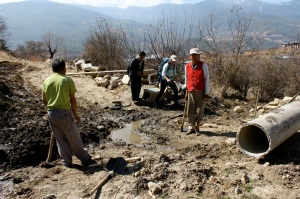 Our trail intersects every now and then with a road so fresh that rocky rubble and tree roots still lie stacked along the sides. The road, Karma suggests, was probably paid for by a wealthy person who either wanted a road to an existing home (so a car could be driven to the front door), or wanted a road made so that a new home could be built upon the hill behind us. “Once we have the road it sets the tone for destruction,” Karma says, adding, wistfully, “People say the road will make our lives easier, but the road can mean many things.” 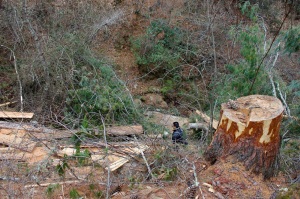 One of the things the road means is access to the forest for loggers, who either obtain permits to cut wood for homes and fires, or don’t obtain permits and cut illegally. Further up the path, we come upon several enormous newly-cut pines. The path is nearly blocked by branches, piles of fragrant sawdust, and discarded imperfect boards, bark still attached. We pause, accompanied by a gray village cat who has been alternately following and leading us, tangling itself up in our legs. “I have a picture of this tree. It used to make nice shade,” Karma says. “This used to be a place I would come to revitalize myself after a hard day’s work.” His lament has nothing in it of cleverness or nostalgia. He seems to simply be narrating his experience along this well-trod and well-loved path that is quickly changing, a microcosm of the larger changes facing his homeland.

“It’s so unbecoming of a Buddhist,” he remarks, shaking his head. “And it all started with the prayer wheel.” 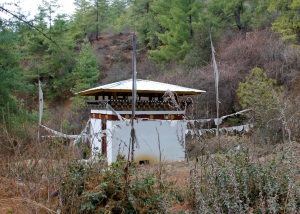 I ask him what he means. He explains that the first intrusion into this spot that for him has been so beloved and natural was a chorten (a small whitewashed stone monument or shrine in which are placed sacred objects) and prayer wheel that was built across a stream at the bottom of the canyon. The prayer wheel inside the chorten is turned by the stream as the water flows under and through the stone structure. The water, thus diverted, no longer falls into the deep pool that was once there, surrounded by trees and ferns. The pool, like the thorn bushes beside the rice paddies, created a rich and delicate environment for animals, plants and insects. When Karma shows us the structure on our way back down the canyon, we notice that here, at this supposedly sacred place, there are more discarded chip bags, candy wrappers, pieces of used toilet paper, and plastic soda bottles than anywhere else on our hike. 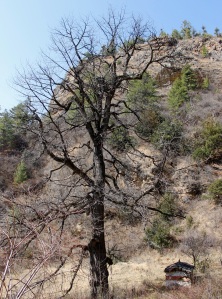 “When there is sanctity…” Karma says softly, searching for the right words, “. . . it (the prayer wheel) is just a symptom of what we desire–our greed.” By building a prayer wheel or a chorten, he says, “We think we have done something pious, an act of earning merit, but have we really earned merit by destroying another form of life?”

Leave a comment to The Wanderlust Gene Cancel reply