They curl up in boxes and baskets, on beds of garbage in nooks, crannies and alleyways, fast asleep all day to bark and howl all night. They congregate around yak entrails and pig heads at the Sunday market meat stalls, snarling over tidbits of flesh. They loll in the sun, warming themselves against the concrete of the college walls, or smack in the center of the courtyard. They trot around, their tails held high, or limp and slump and cower. They drink out of puddles of sewer water burbling up from broken drains, lick their mangy sides, scratch at their fleas, run wildly on the cobbled riverbed, nurse their babies in the parking lots, paw through the rubbish in the campus garbage bin, and occasionally chase cars, but hardly ever bother humans. Mostly they are shy and polite, seemingly preferring their own complex culture to that of their two-legged friends. 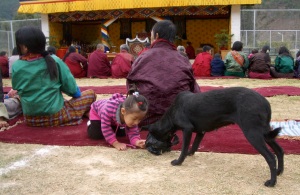 Bhutan is full of stray dogs. If you want to read a great story about them, catch ahold of Kunzang Choden’s Dawa: The Story of a Stray Dog of Bhutan. After reading this charming book, a required text for Bhutanese students in grade 9, I gained a new appreciation for dog culture and some insight into why the Bhutanese seem somewhat reluctant to intervene in dog life. It’s about the circle of karma.

Bhutan’s dogs look like mixtures of every canine you’ve ever known—Rottweilers, poodles, terriers, golden labs, basset hounds, Chihuahuas, corgis, spaniels,  huskies, collies, Lhasa Apsos, Tibetan mastiffs and schnauzers. On any given day this winter there may have been 20 or more adult dogs and several litters of puppies roaming about the Paro College campus. One particular tiger-striped mutt lived in the neighborhood made up by the guesthouse where Ruth and I live, and the four college-owned houses inhabited by three faculty families and the director. No one actually pets this dog, or scratches her behind the ears, but they do feed her leftovers and look after her litters of puppies, to a point.

Gretchen with local puppy and mom

Mama dog started with six pups; as the weeks went by, they disappeared one by one. Walking to and from my office daily, I’d see some vomiting in the grass, tails between their legs, eyes full of mucous. Others scratched and cried, victims of mange or fleas. Each day, it seemed I’d come across a new dead puppy, serenely stretched under a bush or in a clump of grass.  One little black girl survived.

I’m used to a culture where dogs live in houses and sometimes sleep in their owner’s beds; where castrating and spaying dogs is considered responsible and humane; where letting a litter of puppies die would incur the wrath of the animal control officer; where every dog is supposed to have a set of ID tags and be on a leash in public; where people buy clothes and gourmet food for their pets and spare no expense for their medical care.

In Bhutan it’s different. I’m reminded of the Prime Directive in the science fiction series Star Trek. One must not attempt to change another culture or intervene in any way that might alter the future or change the past. In Bhutan, a dog’s life, a dog’s karma, is his or her own. 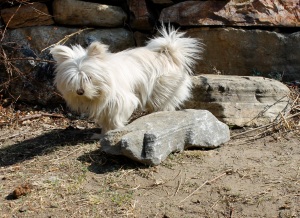