The Weavers of Khoma

When we arrived the village was quiet–a bright early winter sun streaming down out of the mountains across the paddy fields, the occasional crow of a rooster, a gang carpenters at work with hand tools carving the unique and beautiful window frames that characterize Bhutanese homes, pounding the pieces of lumber together with wooden pegs. 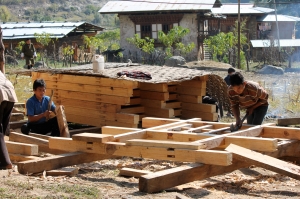 No village in Bhutan has so far captured my imagination more than Khoma, where women using back-strap looms weave some of the finest textiles in all of Bhutan. Our friend Ugyen brought us here so that Ruth could buy a kira for the Trashigang Tsechu, which we were going to attend in the first week of December. Only a year ago, to get to this village in the far north east you had to hike an hour and a half from the main road, but now, as in many remote parts of Bhutan, a bumpy, dusty, dirt path will deliver you in a vehicle. Along the road women walked, stooped over, big wrapped bundles of textiles on their backs, heading from the village toward the main highway, where their wares would be picked up and transported to tourist shops in Trashigang, Mongar, Thimphu or Paro. 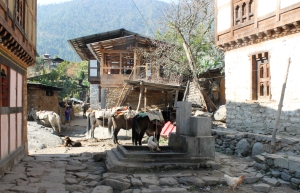 As we wandered from house to house, along dirt paths, into and out of stone-cobbled courtyards we saw women scrubbing clothes at the community tap, an ama distilling ara under a thatched canopy; we passed the place where residents parked their ponies, skirted alongside sweet fenced gardens full of chilis, greens, and garlic; it seemed as if the village was hardly inhabited. Then, rounding the back of one house we happened upon a roofed porch where three women were already hard at work on their looms. We were in awe, as we watched them weave the thin, bright threads of red, yellow, and blue silk into intricate designs, their fingers flying across the warp of the loom, then thump, thump thump, they’d pound down the threads with a long smooth stick, and begin a new row.

Ugyen communicated that we wanted to buy textiles, and soon 50 women had gathered at the chorten at the top of the village, emptying bulging plastic bags and draping their weaving for display across the chorten, transforming the white stone shrine into an outdoor marketplace, swirling with color, pattern, the roughness of raw silk, and smooth cool of cotton.

Mothers with babies strapped to their backs, amas (older women) with wide smiles stained red from doma, bright-faced college girls who’d returned to the village for school break—they all were quick to laugh, eager to practice their English, confident of the quality of their hand-crafts.

After much good-natured negotiating, Ruth settled on an elaborate kira made by an eight-year old daughter of one of Khoma’s finest weavers, who’d only just begun to weave under her mother’s instruction. We also each bought a rachu, a thin, long scarf, worn over one shoulder on ceremonial occasions.

What was it about Khoma that caught my imagination? Not just its pastoral beauty (a picture-perfect village nestled in a valley in the Himalayas) and the fact of its prosperity (as evidenced by its bright homes, abundant gardens, roaming clutches of roosters and hens, its busy carpenters, its fat cattle, its big black-bottomed ara pots), but the notion that the village’s well-being had been created through the artistry of these women. 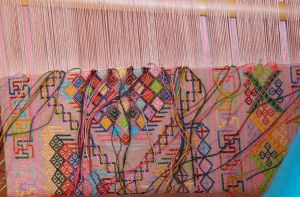